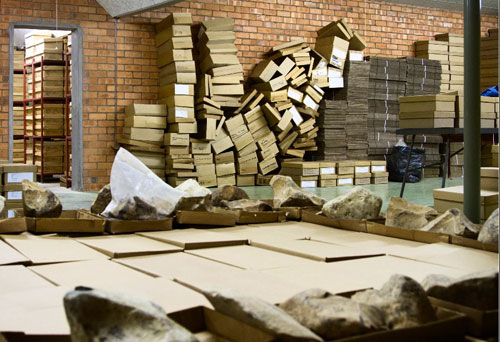 On this evening, the project space of Het Wilde Weten will be the site for an investigation in three parts, presented by artists Emilio Moreno, Eva Olthof and the collective informal strategies.

The artists will each unfold a narrative along the lines of their individual research concerning the image, or its erasure, and the writing of history in different parts of the world. One of the various questions that will be adressed, is: When an archaeological artefact has been stolen and only its photograph remains, what is the value of this image?

A single image forms the background of the performance by informal strategies. This fluid collective invites thinkers and practitioners from different backgrounds to develop collaborative projects. This time it is embodied by Doris Denekamp and Geert van Mil, both visual artists, and Matthijs van Wageningen, musician. The photograph they chose, depicts a smoking man with a mobile phone, who passes a white billboard on an otherwise deserted sidewalk.

Sounds emerge from it: footsteps on concrete, a truck carrying gas bottles shakes as it passes by. The empty billboard is overlooking the scene and becomes receptive to our imagination. So many images have already been projected on it, that they have become indistinct and unreadable. One erases the other. Tonight we want to reread these images.

The Image After is a performative presentation by Eva Olthof, which consists of three parts. It deals with questions concerning archaeological objects, their (early) photographical representations and cultural heritage in times of chaos. The first part discusses an assembly of images that depicts archaeological objects belonging to a museum in Beirut. These objects were stolen just after the civil war ended in 1991 and still remain missing. The second part evolves around early 20th century photographs of one specific statue of Tutankhamen and runs back to the moment of excavation. The last part will talk about the Parthenon Marbles, that, from the early 19th century up until today, are located in two different countries in Europe; Great Britain and Greece.

To interrupt the time in which the object/body is inserted and to take it out… That kind of opportunity manifests itself as a flashing image, as the temporality of the instantaneous spark that stops time. It is only then, out of the continuum, when the object can reveal itself as what it is: a constellation saturated with tensions. That is the favourable moment for us to articulate opportunities. It is a time of the interruption of time: it is a ‘time-now’.
Within the frame of Cancelled Out by Noises and Whispers, Emilio Moreno will present an exhibition consisting of ‘jetlagged histories’ coming from under the earth and above the skies.