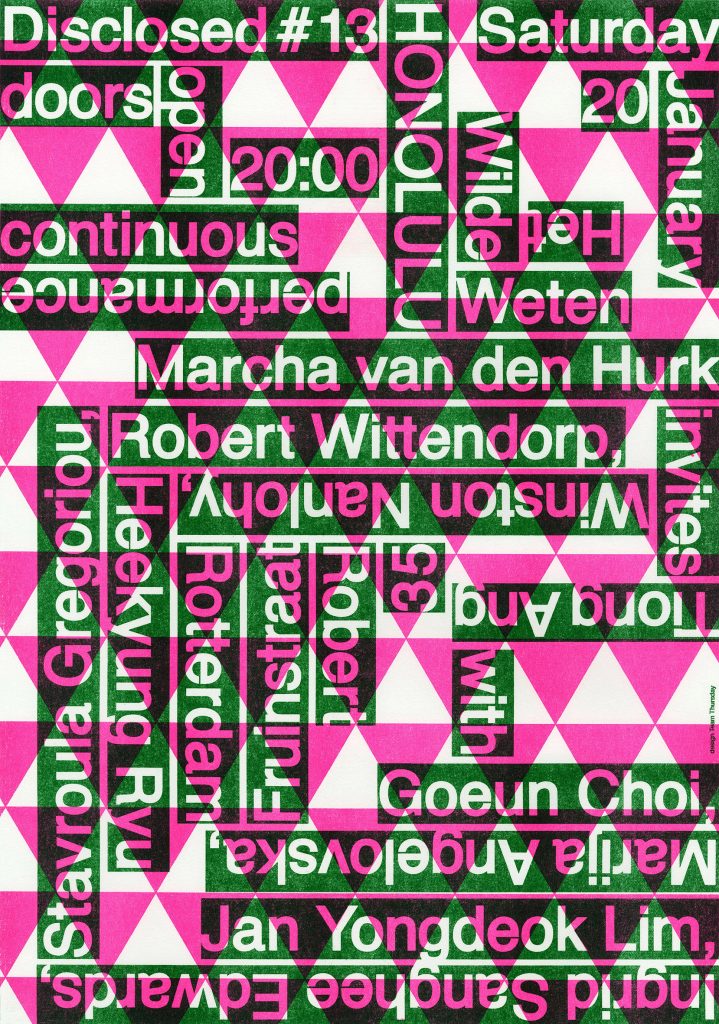 HONOLULU is a collective performance that marks the beginning of a long-term collaborative project by Rotterdam based artist Marcha van den Hurk and Amsterdam based artist Tiong Ang. Invited by curators Sasha Dees (New York) and Kóan Jeff Baysa (Los Angeles), the project is geared towards a final implementation on the islands of Hawai‘i in 2019. The performance takes place in a scenographic setting by Marcha van den Hurk. She invited Tiong Ang to restage his band project ‘Sleeper’(BAK basis voor actuele kunst Utrecht/2017), exploring collective, theatrical, performative, dialogic, musical and vocal motives for a sense of artistic agency, contemplation, and resilience.

HONOLULU is part of the public program DISCLOSED initiated by Het Wilde Weten, which will run throughout the coming two years. Het Wilde Weten consists of sixteen artists that have a studio in the former nunnery at the Robert Fruinstraat. Every six weeks one of the members hosts a public event that derives directly from their artistic practice. This results in lively series of talks, exhibitions, screenings, performances and more, disclosing the energy and pluriformity of the collective and creating public moments to meet and interact.

Special thanks to Team Thursday for the poster design, Machiel Kunst for technical support/light design, and Alejandro Ramirez for videography.

This program is kindly supported by the Mondriaan Fund.